​I am Brighton born and bred and I entered into Arboriculture as it evolved from general horticulture (in which I had previously gained qualifications) during the late Sixties.
I achieved my professional Arboricultural qualification at Merrist Wood College, Worplesdon, Guildford in 1970.

At the start of the Seventies I was appointed Tree Preservation Officer with Brighton Borough Council. I initiated a new regime to survey many hundreds of trees in private ownership protecting these by the imposition of Tree Preservation Orders. While the processes have evolved, the concepts still stand argument and are in place today.

In the early seventies, I became a Arboriculturist with Brighton Borough Council.
At this time the unique policies and procedures to combat Elm Disease were formulated and remain relatively unchanged to this day. Also, previously unheard of, inter-Authority action committees were set up with Councillor involvement.  I also organised a DED symposium with delegates attending from around the country to hear papers by local, nationally and internationally based speakers. While much of the control regime has been copied, nowhere has the success of the programme been so great as in Brighton.
As a direct result of years of commitment the City has been honoured with  guardianship of the National Elm Collection and Brighton and Hove is internationally renowned for its expertise in the field of disease management. 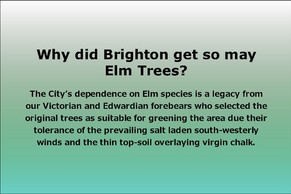 During this early period I sat on EEC panels formulating global strategy for Elm Disease together with experts from various parts of the world and have presented papers on the subject at local, national and international levels.
I visited, by invitation, the City Forester in Winnipeg, Manitoba, Canada viewing the local Elm Disease Control Programme that closely mirrors the methods and success of our own local regime.
I was invited by the Prince of Wales’s Office to write contingency plans to protect thousands of Wych Elms on the Scilly Isles in the event of an epidemic of Elm Disease. The plan would be also implemented, if necessary, in other areas owned by the Duchy of Cornwall; these contingencies are still in place.

I have written Arboricultural Operational Training Modules covering a wide range of subjects for The Local Government Training Group and these were used in County based Training centres such as The Sussex Parks Training Centre, originally based at Stanmer Park, serving Local Authorities throughout both East and West Sussex.  I was also an Arboricultural Instructor for many years at this venue.

I have sat on several panels during an active period of involvement with the Arboricultural Association representing Local Government interests on Health and Safety in Arboriculture, legislation and other allied issues to Government Minister level. I was also actively involved in co-ordinating the Association’s  ‘International Arboricultural Conference’ held in Brighton.