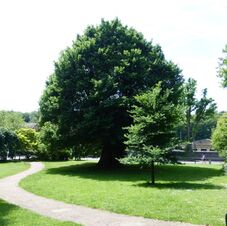 The Sad Demise of a Preston Twin

Commenced in the early 1970s, such has been a success of the City’s Elm Control programme, that while saving thousands of mature Elms and making the City holder of the National Elm Collection many residents are unaware that the Disease remains endemic and causes losses annually.

This fact is only highlighted when a tree of major importance is infected and sadly this is the case again.  The ‘Preston Twins’; two English Elms, situated in Preston Park, Brighton have existed for some 400 years and are considered to be the oldest living Elms in Europe and by some, the World.
Over the years these hollowed trees have been carefully pruned to prevent an over heavy canopy damaging the delicate trunks, they have also been subjected to Elm Disease infection in the past. Early pruning out of the infected limbs have saved the trees, until now.

Ariel infection by Elm Bark Beetles carrying the fungus has now seen one of these historical trees lost to the landscape.  The hot weather has assisted by making the trees system work energetically causing the fungus toxins to be pumped speedily around the tree and into the root system, making remedial works impossible. A very sad loss.

Residents can still help overall by checking their own and neighbouring trees for browning /yellowing of leaves in otherwise green canopies and informing the City’s Arboriculture Dept. Elm trees in private ownership are removed free of charge as part of the Councils Elm Control Programme.
Similarly, if you have logs delivered the Council will inspect free of charge and if any one is of Elm species (which will allow Elm Bark Beetles to spread) they will then remove these and supply a more appropriate burning wood.
​
​Shoe Tree The Level Brighton

​Sadly this Elm tree has contracted Elm Disease and has had to be felled. It was well known as the Shoe tree where locals would throw old shoes.

​The Elms were originally planed in the mid nineteenth century by local dignitaries. The original planting was very close together as all the towns influential people wanted to get recognised as planting a tree. 374 Elm trees were planted but as would normal practice trees would thinned as they grew larger. However there was a reluctance on which dignitaries tree was to be removed so this never happened. Consequently the trees produced poor roots systems with few major anchoring roots, this had a major effect later when so many of these trees succumbed to windthrow during the 1987 storm.

Brighton and Hove update July 2016
The cool weather during the period from June saw low visual evidence of Elm Disease across the city, this is due to the temperature being unsuitable for the Elm Bark Beetles to be active.
The very recent hot period has proved ideal and increased beetle activity is evident with discoloured infected trees now showing in many locations. However not all infections are from beetles infecting new trees, an example being in woodlands where residual root activity is at play.  The hot weather also causes the infected trees to transpire efficiently in turn pumping fungal toxins more swiftly throughout the trees causing leaf browning as a visual indicator. 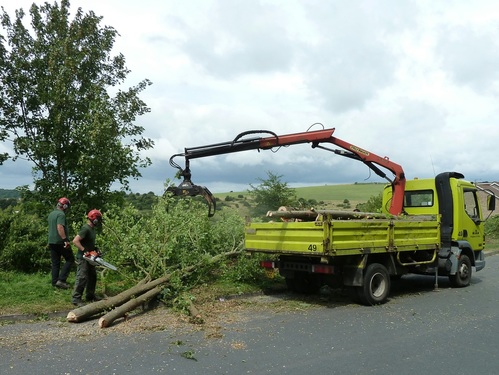 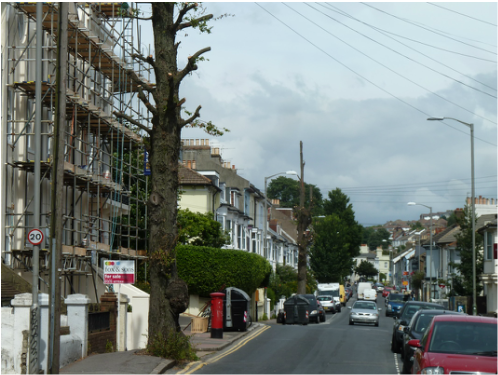 Upper Lewes Road Brighton
Wheatley Elms stripped of leaf canopy with the trunks left in situ to act as ‘trap trees’.  In areas where trees have become infected by beetle activity such trees are left for a period and inspected regularly in an attempt to lure beetles flying  to tunnel into the bare trunks rather than fly to healthy Elms.  These trees emit a chemical plume that attracts Elm Bark Beetles thinking they have a safe place to mate and produce offspring.  Trap Trees are removed and are destroyed by debarking or burning before new  beetles can emerge. 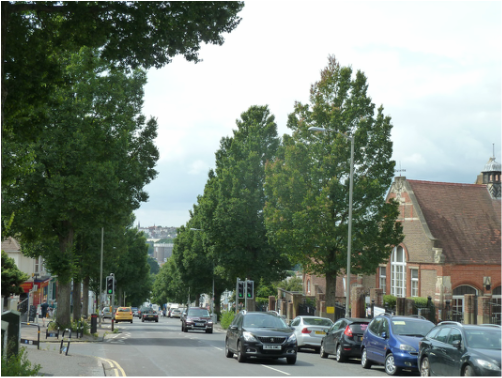 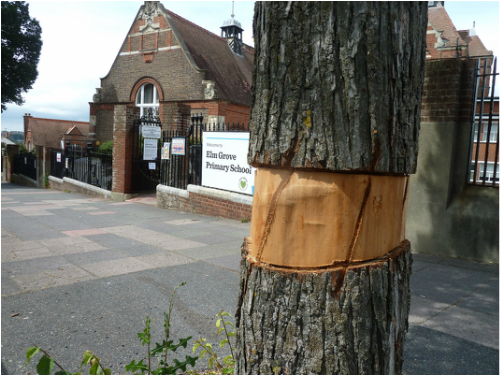 The same Wheatley Elm showing the passage of Elm Disease fungal presence indicated by the dark staining (Tyloses).  The tree has been ‘girdled’ i.e. has had its conducting tissues severed to prevent the fungus reaching the root system where root unions with adjacent trees may have occurred, this locks the fungus in a single tree. It will not save this tree but may well save the trees close to it. 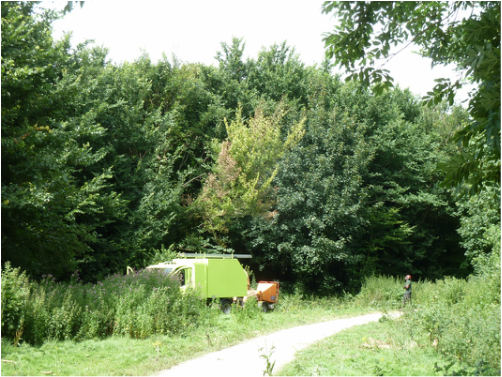 Coldean Woods
Showing residual root infection a difficult area of control due to the sheer numbers of trees in such habitats. It is often better to let matters take their course with frequent inspections ensuring no beetle colonisation is taking place, if this proves the case only trees containing beetles are removed and destroyed. 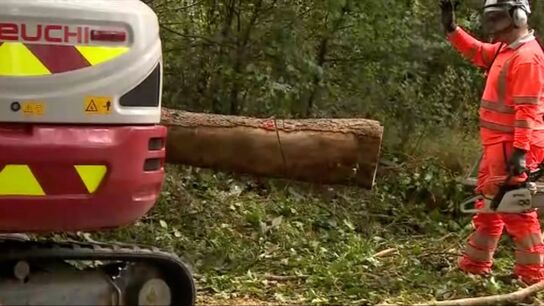