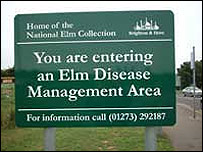 Sanitation Felling
Since the 1970s the control of the disease in Brighton and Hove, has been based on a policy of sanitation essentially involving the removal of moribund Elms to prevent them becoming a source of breeding material for Elm Bark Beetles a major spread vector (Scolytid Beetles) .
The timing generally is critical as between June and September the beetles are actively seeking unhealthy trees in which to  breed. The disease obviously creates many dead or dying Elms ideally suited to  this purpose although any  Elm whose health is compromised by other pathogens,
root interference or general decline are also susceptible to the intentions of  breeding Beetles.  Sanitation control is therefore highly dependant on the speedy detection of such trees regardless of reason.  Trees affected for reasons other than Elm Disease are generally identified during routine Arboricultural inspections of Parks and Highway trees although  the timing in carrying out required remedial work will  not be as critical as with trees detected with Elm Disease during the main infection period.
To  ensure that such trees are identified with little delay, Brighton and Hove has  for many years seen continuous inspection during the period as vital to its  ability to control losses of its Elm stock.  In support of this it has utilised  all media outlets as they have become available to ‘educate’ the public about the problem, a welcome and helpful source of local information. Similarly it has trained Parks maintenance staff to identify symptoms in Parks and open spaces and has a great source of local ‘eyes’ with Street refuse operatives who have  been issued with information sheets and who prove very effective in reported a  range of tree related problems.  The main routine and scheduled inspections  rests with the City’s Arboriculturists and Arborists whose priority during the infectious period is to inspect all areas of the City.  Finally, an experienced  Elm Disease inspector is employed between June and September to inspect all  known Elms in the City attending all sectors of the City on foot. This officer also has a major responsibility for liaising with owners of private  properties where diseased Elms are identified.  While the Local Authority has legislative powers to enter such property to carry out works and charge the owner accordingly.  However, the process is lengthy and the imposition likely to  cause unhelpful and serious issues between residents and the  Local Authority.  As well as imposing financial difficulties to some householders there was seen to be a major risk of infected Elm owners not reporting their tree due to the financial outlay facing them with the high possibility of trees becoming  breeding stock for Elm Bark Beetles if undetected by other methods.  In identifying and considering such issues the City has since the 1970s fully funded the costs of dealing with infected Elms situated in private gardens and  this has remained a significant and important factor in the City’s  success.
Root Severance
As well as the more accepted method of infection involving transmission of the causative fungus  by Elm Bark Beetles into individual trees a secondary method  involves the fungus being passed from tree tree to tree through root produced  ‘suckers’ or root unions.  This relates to the threat posed from an undetected
infected Elm acting as a conduit for spore transfer from itself to adjoining Elms. A classic example of transfer would be with English Elm say in a  hedgerow.  As these do not produce viable seed they have a strong reliance on  producing new trees from their roots and therefore many trees can be reproduced over a period all sharing an interlinked root system.  As happened rapidly from the introduction of the virulent form of Ophiostoma novo-ulmi if one tree became  inoculated with the fungus this would pass via the Xylem  into the tree’s system  and through the related root complex in o the next tree and then the next  progressing, as indeed happened, through the whole hedgerow. This method of  spread contributed to the loss of thousands of  Elms altering the landscape of southern England dramatically. Similarly but distinctly different, Elms of differing species, varieties and cultivars have the ability to fuse their roots with neighbouring trees  thus also allowing transmission from an   infected tree into a healthy one without vector involvement . Such  unions are likely caused by roots from separate trees rubbing together and effecting  a union via cambium contact.
The solution to these problem is the same and involves the physical severance of  roots between interconnected trees. when allowed some years previously this was carried out by drilling a series of holes with a soil auger in a line between selected trees and filling these with a strong soil sterilant that killed off a  band of root tissue effectively severing the union in a manner that did not involve major alteration to the surrounding ground, a boon in formal parks and private gardens.  With such chemicals now banned or their use heavily legislated, this effective treatment has relied on a more intrusive method and involves physically trenching to cut or tear roots to effect separation.  This  is simply done where room allows, using the back arm of a JCB or similar vehicle fitted with a trenching bucket but the method still requires a positive assessment on where to position the trench to avoid severing the root system to a degree where the structural stability of the tree is adversely affected.
Where room is very restricted  it may be possible to access with a purpose built  powered ditching machine which can create the desired effect with the minimum of disturbance.  The latter fact also makes this option ideal  where disruption to fine turf or formal gardens is required to be kept to a minimum.  Following  root severance operations it is necessary to ensure that visual inspections of the trees involved are carried out to ensure the efficacy of the treatment with reversion to felling required if the treatment has been unsuccessful.

Pruning Out (of infection)
While the sight of an Elm with large areas of its foliage shrivelling with yellow and  brown leaves abundant suggests felling is necessary, trees in such an advanced  stage of infection need not exist in a control regime where frequent inspections are undertaken.  Where trees are found with visual symptoms affecting around 10% of the overall canopy there is a real opportunity to carry out the removal of  the infected limb only, pruning back to a point beyond the point of tylosis (a  gummy dark material produced in response to the present of the fungus).  This operation has seen many infected trees ‘saved’ from a certain death due to the  high level of speedy detection by all involved.