The Day after the Storm And The Clear Up Operation

In the relative quiet of the first light of morning I walked with a number of my Arborists down to The Level and the first real realisation of the storm’s destructive force began to register.  The scene here was possibly reminiscent of those that soldiers might experience after an artillery barrage with large mature trees uprooted and laying across each other in a confused jumble.  Trees still standing had lost their natural shape as wind gusts had torn off either individual limbs or large sections of the leaf canopy.  Of the 374 trees forming The Level treescape prior to the storm, around 370 were Elm species and all had received some level of damage by the morning of the 16th.  The area was now unrecognisable from its former importance as a major green oasis in the town centre.
Walking south through the town centre gardens revealed similar levels of tree damage and losses through the Victoria Gardens, The Pavilion and Old Steine and large, mature once fine Elms that we had protected from loss to Elm Disease for the past sixteen years had been destroyed in a single night of nature’s anger……………….heartbreaking.

Subsequent surveys identified that trees in most of Brighton’s Parks, tree lined streets  and  woodland had received significant damage with thousands of fallen trees and others seen as  ‘dangerous’ structures as they had fallen but were still subject to movement or were still standing but had damaged canopies requiring tree-surgery.  It was obvious that the then Borough’s treescape was sorely compromised and that a major ‘restoration operation’ was necessary, but getting the town moving again was an immediate priority.

The planning that took place over the next few days cannot adequately be put into words nor can the individual and collective efforts of all of the Parks and Recreation staff be praised highly enough, but the following may give a brief insight as to what was achieved following the initial shock effect.  For me it started with trying to get to our offices at Moulsecoomb Place on the Lewes Road only to find that fallen trees had prevented staff from gaining entry, so the removal of these trees proved to be the first task  undertaken.  Once into the office many of the Officers, despite their specialities or seniority manned telephones taking details from concerned members of the public prioritising ‘jobs’ and passing these to the Arborist teams.  Local Arboricultural Contractors were approached for assistance and the task of identifying large plant such as cranes was began. In a fairly short space of time on day one following the storm, cranes were operating with Arborists literally harnessed onto the large hook and lifted on the cable to prepare trees leaning on buildings for removal while keeping further damage to a minimum. This, among other methods employed would certainly be against current Health and safety measures but the effects of the storm had not been encountered previously by anyone involved and methods of work were utilised on a best needs basis having determined and assessed the risks.  One superb piece of machinery was lent to us by the Aggregate company working at the Shoreham Harbour basin.
This was a huge articulated tractor unit with a 10 yard two part bucket.  While not licensed for the highway the local police allowed its use and by the end of the first day it had ‘eaten’ its way through the debris of several roads snapping trunks and pushing heavy trees to the side of the road.  This and other mechanical units together with a mammoth effort by Parks and Borough Engineer’s staff wielding assorted hand tools, Arborists and contractors, all roads in Brighton were passable with care although not clear of substantial debris.  On day two, our then Director tasked myself and a colleague Nigel Skinner with planning the clearing up operations.  The prioritising being carried out as previously mentioned dictated the workload of the Arborist teams and some contractors and allowed us to look ahead at what was needed.  The most simple factor was that we would not have sufficient skilled staff to deal with large timber nor indeed the equipment even if we had.  Another colleague Mike Ditch telephoned every equipment supplier he could find, purchasing chainsaws, oil and petrol cans together with personal safety equipment and maintenance tools.  Despite the condition of many roads in the County Mike also drove to many of the outlets collecting the items so they could be readily available.  Some of the Arborists were called back and helped instruct staff in the three day chainsaw course (crosscutting at ground level only) that we employed at the Sussex Parks Training Centre.  Staff showing an acceptable degree of competency were equipped  and allocated a team of staff to help clear timber as it was cut into manageable sections.  as the roads became clear, staff with hand tools were redirected to Parks and open spaces to assist clearance by the newly formed chainsaw sections.  The Arborists and selected contractors continued dealing with major incidents and carried out major tree surgery to reduce risk and retain damaged trees for the future. 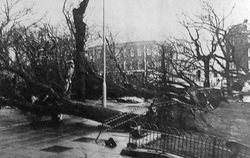 With so much timber down, what to do with it became a significant factor.  In the end the sheer volume together with a glut of timber going to the sawmills from all areas affected and reducing prices drastically made choices simple.  Where possible our precious Elm was sold to mill together with some other choice species meeting the grade.  Everything else was sold for pulp or burned, either in the Park where it fell or transported to Waterhall Valley and these large fires continued to burn for weeks, a sad reminder of those few hours that had so dramatically altered the Town’s treescape.

So far our planning had worked reasonably well and while our Parks, streets and open spaces still showed dramatic visual evidence of the prior damage experienced, they slowly became safer places for the public to return to and the replanting of damaged areas could be seen as a positive thing for the future.  However, while the combined efforts of many staff, contractors and other helpers had been directed at the clearance of these areas of concern, substantial tracts of our 504 hectares of woodland had been severely damaged, indeed flattened with trees that had fallen laying across one another in numbers to numerous to calculate.  Other factors to consider were the difficult terrain of some of the areas and how best to deal with each site especially as we had no specialist in-house Foresters experienced in large clearance and no heavy forestry equipment.  That then became the next challenge.
google-site-verification: google8fcdf3b453115515.html