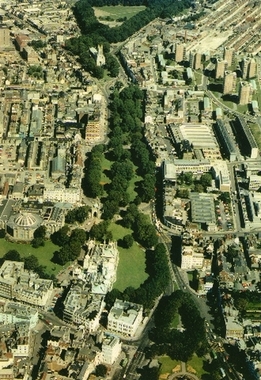 As Brighton Borough Council’s Arboriculturist I was used to following the local weather forecasts daily for conditions that might influence the safety of the Town’s trees and of course the safety of the public in the event of a tree being damaged or falling.Thursday 15th of October 1987 wasn’t that different when warnings of high winds were forecast for the Sussex coast and both myself and some of the Borough (Brighton was yet to become a city) Arborists prepared ourselves for being‘called out’ at some time to deal with damaged or generally unsafe trees.

As the forecasts worsened and the potential for very poor conditions developed we were pleased to hear Michael Fish, a prominent weather forecaste,dispel the, till then, growing certainty that we were going to experience a hurricane with the now infamous quote "Earlier on today, apparently a woman rang the BBC and said she had heard there was a Hurricane on its way ...well if you watching, don't worry there isn't "Poor Michael! as it proved subsequently, technically we didn’t have a hurricane but we did experience the worse known storm since 1703 with winds constantly gusting in excess of 80 mph locally, At Shoreham- by- Sea, wind gusts were recorded at 120 mph before the anemometer failed and at Eastbourne gusts of 110 mph, the maximum the equipment could measure were recorded. It seems a depression building in the Bay of Biscay was the culprit and this, moving rapidly North Eastwards came ashore over Cornwall and continued to roll along the south coast causing major destruction in its wake. Some 15 million trees were estimated to have been lost overnight but it should not be forgotten that 18 people lost their lives and the misery of lost or damaged homes left many in difficult circumstances.

From an Arboricultural viewpoint, any significant winds, even our south westerly prevailing winds that we were used to up to gale force 8 were always of concern but were significantly more so at the time of the storm as we had experienced long periods of heavy and steady rainfall that had effectively waterlogged the soil and therefore made trees more vulnerable to windthrow (becoming uprooted) when subjected to high winds or gusts than in normal conditions.

For me the experience began late on the 15th when I received a telephone call that a small tree in Woodingdean had blown down and blocked a road, ar the time trees blocking the road was an infrequent act and I contacted one of the lads to help me deal with it. On arriving back home I received another call,another small tree off of Ditchling Road had fallen. At this time the wind was not of concern but was freshening and in a short space of time became of concern. At this time calls to home and to my vehicle based Pye radio system from the Council’s emergency team and the police were becoming more persistent. The concerns we had had over the potential for damage from a waterlogged ground and high winds combination began to prove very real and soon all of the Arborists and a couple of local Arboricultural Contractors were working constantly to clear roads and relieve damage to buildings. In the early hours of the 16th so many trees were down as the wind velocity increased and the rainfall persisted that it became impossible to work safely or indeed to keep up with the destruction and for the rest of the night until daylight we assisted the emergency services as requested from particular clearance operations to directing traffic away from dangerous situations.

At one point during the night I went home to change into dry clothes only to find my car couldn’t be seen under five or six Wheatley Elms that had fallen. Ducking under the foliage I expected to see a vehicle far shorter than it had been but the tree gods must have been smiling as the trees had lodged into each other preventing any falling within about two feet of the roof. A couple of cuts to remove branches and I reversed out with just an accumulation of dust and leaves covering the paintwork and the thought still makes me smile today. However, many were not so lucky having their vehicles destroyed and other property damaged in varying degrees including their homes.